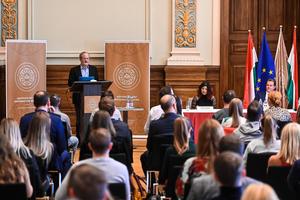 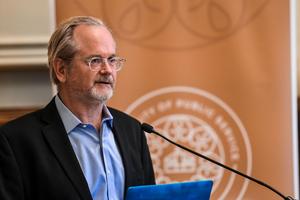 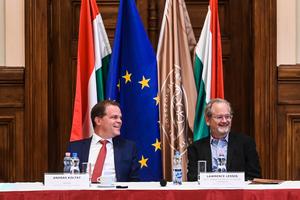 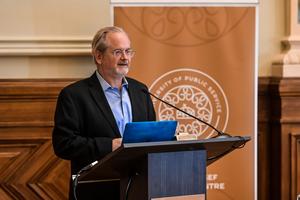 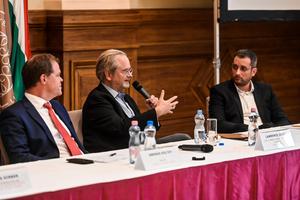 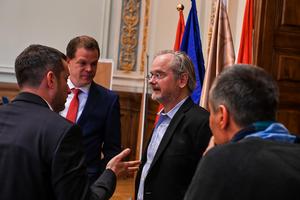 At the Society of Internet Platforms event organised by the Information Society Research Institute, European and American experts debated online platforms for two days in the Széchenyi Dinner Room of the Ludovika Main Building of the National University of Economics and Business. The closing keynote address was given by Lawrence Lessig, an American academic, lawyer and political activist, currently Professor of Harvard Law School and Director of the Edmond J. Safra Center for Ethics.

On 13 September, the Wall Street Journal launched a series of Facebook files, which began publishing material that distorted the social media's image of the world, he began. Describing the platform's business model, he pointed out that Facebook has always chosen profit over making the social network safer. What can we learn from what these files have revealed? - he asked. In response, he looked at the almost imperceptible effects: all platforms are presented to us as the main arenas for the embodiment of free speech. This is true, the professor stressed, but we are talking about constitutionally unregulated platforms where neither hate speech nor negative images can be restricted.

Indeed, the companies that run these platforms see their own sites as "idea-sharing" spaces, and if they were to think of curbing freedom of expression by regulating the content that can be posted, it would mean deleting messages, censorship in the eyes of users. Since companies are driven by profit, messages selected and amplified by machines will always turn out later to be 'selective amplification' based on fear, leading users in the worst direction. The business models of companies depend on the attention they get from people, i.e. they are based on conveying amplified information to us in a more targeted and personalised way," the academic stressed. "These platforms are starting to understand and manipulate us in order to get us to spend more time with them, which they can then profit from," Lawrence Lessig concluded.

Referring back to the phenomenon of body hacking, the professor explained that the main goal of companies is to create and operate addictive interfaces that allow them to take a bigger slice of the "surveillance capitalism". This means that rather than passive surveillance, they start to manipulate users emotionally, thus exploiting them. Facebook CEO Mark Zuckerberg has previously said that "it's a win-win situation", as people get entertainment in return for their personal data. However, Lessig says that this is not the case: conflicts between members of society often lead to violent acts, which are not caused by Facebook and other platforms, but they play a major mediating role in getting (dis)information to different groups. "The main strategy of companies is to reinforce polarisation through the factual presentation of fake news," he said. This is not only the case on the internet, but has also played an important role in shaping the minds of communities since the days of television.

"Freedom of expression in democracies cannot be allowed on social media platforms, if we cannot legally regulate for-profit companies that make their revenue from our attention, it has a detrimental effect on society and its state apparatus," the US professor concluded. In this context, he called the United States of America the "canary bird of democracy", referring back to the old habit of miners: if the bird they took with them died because of the quality of the air underground, they knew they had to get out.

Lessig mentioned respect for the meta-value system as one of the most important principles of free speech. The term "meta" was first coined by Mark Zuckerberg. The metaverse is a complete online world where users can not only consume the services provided by social media, but also live in them.

He concluded: "We have created an artificial intelligence that we can no longer control”.